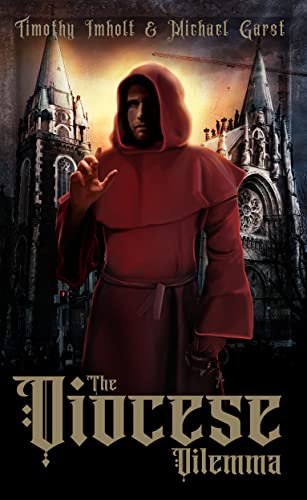 Father Franklin Santini was tired of rising crime rates, and a downward spiral of humanity. He was frustrated by people who felt the confessional could be used as a get out of Hell free card, thereby perverting scripture to justify their sinful actions.

He decided to take matters into his own hands. He decided to get a little dirty to make sure things were clean. Some people were just beyond absolution on the Earthly plane of existence and needed to meet Saint Peter at the pearly gates and see if they should be forgiven or forever cast into hell.

He chose his targets carefully, and applied the Scriptures involving enforcing the Laws of God, including the tenets of “and Eye for and Eye” into action.

He found that using the rules of his mafia family, with his own biological father being involved in organized crime, he realized that sometimes you have to do what is wrong, to do what is right. With the Laws of God being above those of man he isn’t a murderer. God doesn’t see him that way. But will the FBI?

Can the Church keep his activities covered up? Can his family help him stay out of trouble? Will his mission continue?

Father Santini finds ways to eliminate some of those sinners from the face of the Earth using Old Testament methods, and lessons learned during the Inquisition to cause enormous amounts of pain as he cleanses the Earth of rotten souls.

21st Century Earth – A planet ravaged by superpowers waging war against each other with the most awesome arsenals in the history of mankind. But America has a strategic advantage: its new breed of high-tech warriors, forged from super military technology and the limitless power of the human mind. They’re the WARBOTS, a battle tough, laser directed attack division standing ready to protect the cause of freedom from its enemies.

The New World Order is crumbling. The dreaded totalitarian Eat World goads the West into borderland conflicts that could ignite into total war. However, technologically ill-equipped to take on America’s invincible Warbot legions, kept razor sharp for battle, the enemies of peace bide their time – until their secret sabotage is complete. High atop the Himalayan plains, a super la has developed a strategic weapon capable of rendering all Warbots useless. When American intelligence stumbles on the plan the President orders Curt Carson and his Washington Greys to destroy the fortified facility and the lethal breakthrough it has developed. Fighting sub-zero blizzards and the combined armies of China and India, the Warbot warriors scale treacherous heights to win the war for peace!

21st Century Earth – A planet ravaged by superpowers waging war against each other with the most awesome arsenals in the history of mankind. But America has a strategic advantage: its new breed of high-tech warriors, forged from super military technology and the limitless power of the human mind. They’re the WARBOTS, a battle tough, laser directed attack division standing ready to protect the cause of freedom from its enemies.

The bloody invasion of the peaceful West African nation of Senegambia sent shock waves through the free world. Thousands were killed by the terrible armies of the insane military dictator Generalissimo Modibo in his ruthless attempt to seize power for his impoverished nation. And when the President of the United States demanded his complete and immediate withdrawal. Modibo responded by slaughtering scores of American nationals and imprisoning the rest. Outraged, Washington had no choice but to retaliate and ordered its awesome high-tech strike force, the Washington Greys, to restore order and bring the hostages home. Fighting tough terrain, pitted against a combined army of desperate African and foreign soldiers. Commander Curt Carson and his warbot warriors hit hard with surgical precision. In the final bloody assault, they must rescue their fellow countrymen and bring freedom to the small war-torn nation or suffer the consequences of total global war!

America’s Elite Force Of High-Tech Commandos Wage War To Save The Nation’s Future!

21st Century Earth – a planet torn by superpowers waging war against each other with the most awesome arsenals of death in the history of mankind. But America has a strategic advantage: its new breed of high-tech warriors, forges from super military technology and the limitless power of the human mind. They’re the WARBOTS, a cyborg-steeled, laser-directed attack division standing ready to protect the nation from its enemies home and abroad.

Jebel Miswar, Yemen, the primary supplier of the world’s richest iron ore to the industrial powers of the West, is seized by an army of Marxist guerrillas armed with the latest in robotic weapons from the Chinese. The world economy is thrown into chaos and global war threatens the delicate balance of peace. Only one force on earth can stop the terrorist fanatics from achieving their terrible goal – Lieutenant Colonel Curt Carson’s battle-hardened force of Warbot soldiers, the Washington Greys. Fighting bloody attacks on desert, mountain, and sea. America’s super warriors wage a lethal war against massive military odds to save the planet from total destruction.

America’s Elite Forces of High-Tech Commandos Wage War to Save the Nation’s Future
Now back in print!

21st century Earth – a planet torn by superpowers waging war against each other with the most awesome arsenals of death in the history of mankind. But America’s had a strategic advantage: its new breed of high-tech warriors, forged from super military technology and the limitless power of the human mind. They’re the WARBOTS, a cyborg-steeled, laser-directed attack division standing ready to protect the nation from its enemies home and abroad.

A crazed futurist cult has begun the deadly countdown to launch its prototype spacecraft from a secret desert missile site, jeopardizing millions of innocent lives in nearby Las Vegas. Protected by nuclear weapons set to destroy key cities if the liftoff is interrupted and a special robot army designed to repulse any conventional military attack force, the cult complex is impregnable to the local police and state militia. With only hours to spare, the President unleashes the lethal might of Lieutenant Colonel Curt Carson’s warbot troops, the Washington Greys, into the bloody fray with but one tough objective: shutdown the takeoff before the country becomes a radioactive wasteland!

21st century Earth. A world poised on the brink of destruction as rival nations fight each other with the most awesome war arsenals of all time. The only chance for the future rests with a new breed of high-tech warrior, forged from a fusion of advanced technology and the human brain. Born in top secret government laboratories, battle tested under the toughest conditions known, they are the WARBOTS – the first and last line of defense against total annihilation! The peaceful island of Sakhalin turns into a scarred battlefield as the armies of Chile, Japan, and Russia fight for control of its mineral-rich land: In violation of all known treaties, the deadly conflict must stop before it explodes into global war. The solution: the super combat unit of warbot-equipped Washington Greys. Mounting a high-tech invasion on three fronts, the Greys. Mounting a high-tech invasion on three fronts, the Greys cut through the hostile forces and regroup for a final battle that will decide the fate of the world!

The most awesome force in military history on guard for freedom!

In the ongoing struggle for survival in a war-torn world, a new breed of super-warrior explodes onto the international battlefield. Terrible instruments of destruction born in top secret government laboratories, half-human and half-machine, they are the WARBOTS – freedom’s first and last line of defense against the world’s evil overlords of terror and death.

Russia’s centuries-old ambition to conquer lands along its southern border erupts in a savage show of force that pits a horde of Soviet-backed Turkish guerrillas against the freedom-loving Kurds in their homeland high in the Caucasus Mountains. At stake: the rich oil fields of the Middle East. Facing certain annihilation, the valiant Kurds turn to the robot infantry of Major Curt Carson’s “Ghost Forces” for help. But the brutal Turks, supported by a deadly Soviet Spetsnaz battalion, far outnumber Carson’s desperately embattled Washington Greys – and on the blood-stained slopes of historic Mount Ararat, the high tech warriors of tomorrow must face their most awesome challenge yet!

From the high-tech laboratories of tomorrow springs a new breed of warrior – Half Man, Half Machine – The Warbots

Awesome armored giants with computer brains linked for instant response to their human masters, the Warbots are the deadliest instruments of devastation and destruction ever to stride the battle-scarred earth in unyielding combat against the enemies of freedom.

Major Curt Carson has his orders. He is to lead his Warbot-equipped Washington Greys in a search-and-destroy mission in the mountain jungles of Borneo. The enemy: a strongly entrenched army of Shiite Muslim guerrillas who have captured the Second Tactical Battalion, threatening them with slaughter. As allies, the Washington Greys have enlisted the mysterious Grey Lotus Battalion, a mixed-breed horde of Japanese jungle fighters. Strong, intelligent, they are still dedicated to the ancient Japanese warrior-code of bushido and their primitive jungle skills are a perfect compliment to the Washington Greys’ high tech ways of waging war.

Together with their newfound allies, the small band of high tech warriors must face swarming hoards of fanatical Shiite guerrillas in a battle that will decide the fate of Southeast Asia – and the security of the free world.

This is the battle: the ongoing struggle for survival in a world still ravaged and torn by warfare. And these are the soldiers: massive, armored, half-human, half-machine super warriors – The Warbots. Awesome instruments of devastation with computer brains intimately linked and instantly responsive to their human masters’ brainwaves, they are America’s first and last line of defense.

Civilization is under attack! A “virus program” has been injected into America’s polar-orbit military satellites by an unknown enemy. The only motive can be the preparation for attack against the free world. The source of “infection” is traced to a barren, storm-swept rock-pile in the southern Indian Ocean. Now, it is up to the forces of freedom to search out and destroy the enemy. With the aid of their infantry – The Warbots – The Washington Greys mount Operation High Dragon in a climactic battle for the future of the free world.

In the volatile 21st century, they are America’s first and last line of defense!

NOW back in print!!

Born in top-secret government laboratories, a bold new breed of super-solider explodes on the international battlefields of tomorrow! The most awesome fighting force in military history, they are the warbots!

South of the Border, a bloody power struggle rages between Mexico’s ruthless narcotics kingpins and the country’s equally corrupt junta government. in an attempt to involve the united states in the deadly conflict, Luis Sebastian “Gordo” Guerrero, Latin America’s most feared druglord and his private army launch a series of brutal raids against small, unprotected towns in the southwestern united states. Determined to avenge the first assault on America’s mainland in over a century. Major Curt Carson and his robot infantry pursue the murderous invaders into their own territory, en route to an explosive confrontation high atop Mexico’s Sierra Madre mountains. With trigger happy federal troops on one side and bloodthirsty “Herreronistas” on the other, the outnumbered high-tech gladiators face their deadliest challenge – their chances appear to be near zero!!!