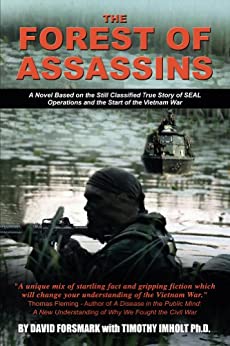 The Forest of Assassins

The Forest of Assassins is a historic thriller set in the earliest days of the American involvement in the Vietnam War. It involved the earliest of Navy SEAL teams. It is set in a time when the NAVY still did not admit these men existed, much less had they determined if those units would survive until the next conflict, or if the experiment would be abandoned.

The Forest of Assassins tells the story of Navy SEAL Lieutenant Hank Dillon, a squad commander, deep in the jungles of South Vietnam when America’s involvement in the war was still in the “advisor” stage. Dillon’s mission is to wreak havoc among the Viet Cong guerillas who are terrorizing the countryside.

Their mission—and even their presence in the region—is top secret. But Hank has a problem even bigger than a deadly and determined enemy; he has a traitor in the ranks.

Meanwhile, a suspicious NCIS cop is nosing around Hank’s mysterious operation, certain that it is a front for drug running and other illegal activities.

Things are tense for the young Lieutenant who just wants to go home to his wife…intact.