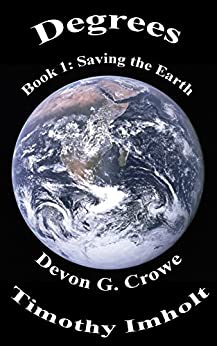 In 2030, human civilization is faced with almost certain extermination. Weather patterns have become more extreme. Super storm after super storm pops up without warning. Some cities and even some smaller nations have become uninhabitable. Some say it is a man-made issue, others claim it is natural. To those losing family members, to those whose lives are destroyed, it doesn’t matter what caused it, they only care about how to make it stop.

The public is demanding action. In the U.S., politicians are under pressure to act swiftly. Conservationist groups lobby for ending the use of fossil fuels, while Corporate interests lobby for retaining full exploitation of fossil resources.

A scientist named Emma Hallbar offers a solution to climate change that offers humanity a lifeline. She dedicates her life to finding a way to control the environment so that all humans can live a life free of these unpredictable climactic temper tantrums. The result is the largest space program as well as the most unified global effort in history.

Human nature creates unforeseen conflicts on a scale that have globally tragic effects. Just when she thinks that she has the whole thing under control, a terrorist strike threatens to take it all away. Can Doctor Hallbar save humanity from Mother Nature as well as human kind’s interpersonal struggles?

Can a chaotic system as complex as the climate of an entire planet be influenced by man at all? Can she find a way to make that influence positive? Can she control the weather well enough to stop the tragedies that are destroying the lives of millions of people?

Degrees Book 1 is the first in a series by Optical Society of America Fellow Devon G. Crowe and #1 Bestselling author Timothy Imholt. It is a highly entertaining, fast moving first step into a series of novels that contain events that threaten the future existence of humans as the dominant species on Earth.