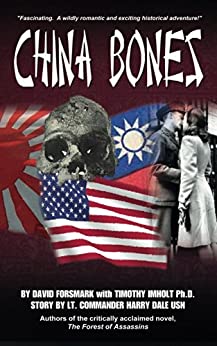 China Bones is the story of a young American Marine in China through the Sino-Japanese War, World War II and the ultimate fall of Shanghai to the Communists in 1949. Zack Cameron finds love and fortune in Shanghai, loses his fortune, and survives a brutal Japanese prison camp only to face even more danger. In a race against time, Zack is forced to put together a desperate treasure hunt amid the confusion of civil war and the Communist takeover of China.

China Bones is also the story of the great city of Shanghai. It begins with the old China – the International Settlement where allies and enemies ruled side by side in a time of uneasy tension, while the very rich, the very poor, soldiers, diplomats, business tycoons all take part in, or bear witness to gunboat diplomacy. China Bones guides readers through how the city suffered under a brutal occupation by the invading Japanese, only to then turn herself over to perhaps the most brutal dictatorship the world has ever known.

Equal parts thrilling historical adventure, passionate wartime romance, and gripping war story, China Bones will appeal to fans of the adventure novels of Wilbur Smith, the military novels of WEB Griffin, as well as those fascinated by the examination of China and Chinese life in the novels of Amy Tan.