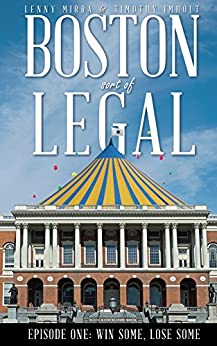 People get involved in politics for a host of reasons: idealism, belief in something greater than themselves…maybe they are too ugly to be a movie star, whatever. Politics was once called show business for ugly people, but for Kelly it started out as idealism then, after winning her first election she realized that it was kind of like working in a circus. Perhaps it was the constituent requesting that the state harvest organs for donation from prisoners with life sentences, or maybe it was the man who wanted to stop the government from using Chemtrails from commercial aircraft to alter everyday citizen’s brainwaves to make them easier to manipulate.

Very loosely based on some actual events in and around the State House of Massachusetts, which boasts the likes of Paul Revere to the more modern day elected officials where three Speakers in a row have gone to prison for events that happened during their time in office.

Boston, Sort of Legal mixes the drama of politics with the comedy of what actually goes on when the cameras aren’t on. From the Speaker whose brother is involved in organized crime, to Kelly who is holder her first elected office, you won’t see what is coming next.

Pull up some hot wings, and enjoy a good lager, it’s going to be an exciting ride.