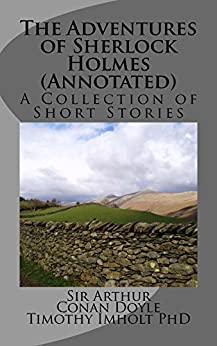 The Adventures of Sherlock Holmes (Annotated)

The Adventures of Sherlock Holmes is a collection of twelve short stories. This was the earliest collection of short stories which were originally published in The Strand between 1891 and 1892. These are, as usual, narrated from the perspective of Dr. Watson the close friend and colleague of Sherlock Holmes. It is a masterful way of narrating the story as it puts the reader in the center of the action without getting exactly inside the head of Mr. Holmes which would ruin the surprise.

Sir. Arthur Conan Doyle uses a great deal of 19th Century English jargon and other bits of language that have ceased being used. The annotations in this volume offer up explanations for those so that a new generation of readers can get through the material without guesswork while allowing the original vibrant text to come through. These works are meant to be enjoyed, they have been for more than one hundred years and hopefully will be enjoyed for another few hundred!