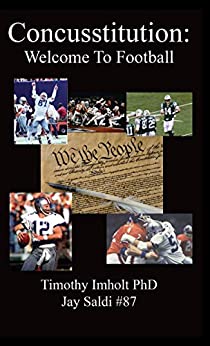 Football has been around for more than 100 years. It has had it’s fair share of controversies. Concussions are just the most recent of those.

We give a history of the sport, the evolution onto television, explain the concussion threat, and even show some ways it can be solved.We include as many facts as we can, and also wanted to get a first hand report on the problem so we reached out to some former professionals. Those interviews include: Jim McMahon, Greg McElroy Jr, Howard Richards, Randy White, Coach Bob Ward, and Roger Staubach.

Jay Saldi, one of the co-authors is a former payer for the Dallas Cowboys and the Chicago Bears. Across his 9-year career he earned 1 Super Bowl ring and played with some of the finest people to ever set foot on the field.

Jim McMahon, one of the people interviewed for his perspective on concussions, was an NFL quarterback who earned 2 Super Bowl rings. During his career he suffered multiple concussions and at one point actually played part of a game with a lacerated kidney. His perspective on injuries in Football is first hand, and interesting.Greg McElroy Jr was an NFL quarterback who is actively involved in the league and the sport to this day. His experience level is expert, lengthy, and he is up to date on all of the injury issues facing the league today.

Howard Richards is a former NFL player who is now involved in the NCAA level of the game. He is working with the players of the future and as concerned with injuries and what can be done to prevent them as anyone you can ever speak with.

Randy White is a Hall of Fame Defensive Tackle. There are people he played with that still look for a place to hide at the mere mention of his name. His perspective on injuries was different in that it was his job to tackle, not avoid those tackles. His nickname while playing was The Master, as in half man half monster. He once played with a broken foot and offered up some unique methods to avoid injury.

Coach Bob Ward was the first conditioning coach employed by an NFL team. He explained to us ways he used to train players so that their chances to be injured would be lowered. He was a player himself, but helped to build one of the finest teams to ever take the field, and was tasked with keeping them ready to play, a job he did very well.

Roger Staubach needs no introduction. We chose to close out the book with a discussion he was happy to have on the direction the league is going regarding injuries. He was giving with his time and had some informative things to say.