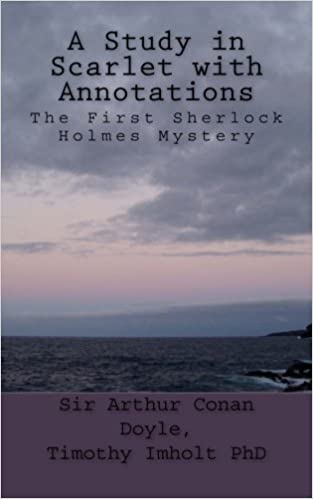 A Study in Scarlet with Annotations

Sherlock Holmes is a detective that needs no introduction. His mysteries have captivated audiences for more than a century. A Study in Scarlet is the original, it is where the Holmes saga began.

In this book, we are introduced to Holmes, and as a part of the story, Watson and Holmes meet, and begin their career of solving crimes together.

In this case the mystery is a murder that takes the reader around London and throws us into a love triangle as well as a variety of religious aspects of life at the time Sir Arthur Conan Doyle was alive.

We get the chance to learn, in detail, Holmes’ way of reasoning through a crime scene. His skills are impressive, yet not as refined or experienced as they will become later, in future books.
The story is fantastic, and Sir Arthur Conan Doyle, like Holmes, was just learning his craft. This book launched a career that has entertained readers for generations, and will continue to do so in the future.

The annotations that have been added to the book are meant to help the reader with some of the more dated language. The story in this book appears exactly as it originally did. The annotations are found as footnotes on all of the relevant pages, and add to the enjoyment of the story.