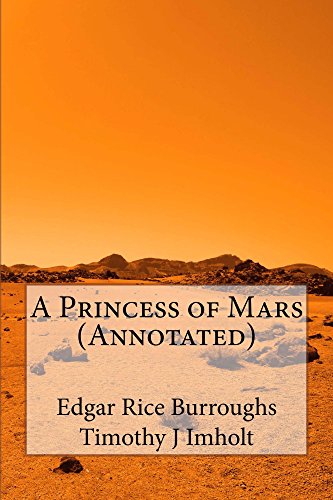 A Princess of Mars (Annotated)

Edgar Rice Burroughs authored many of the most fascinating books of all time. The John Carter books represent a fantastic thrill ride, even today.

The only challenge with these manuscripts is that the language is becoming a bit dated. Edited versions can detract from the authors voice, and can detract from the enjoyment of the story as it was intended. This book was originally published in 1912, and appears here in the original form, with extensive footnotes/annotations throughout. These are intended to allow a modern audience to really connect with the original text.

The hero of the story, John Carter, was a veteran of the American Civil War on the Confederate side. After the war, he was prospecting for gold somewhere in Arizona. He and his partner ran into a group of rather violent Apache Indians and had a few…challenges. John Carter attempted to hide in a sacred cave belonging to these Indians and was instantly transported to the surface of Mars where he spent a decade living on the red planet. During his tenure there he finds he has super human strength and agility thanks to the lower gravity and atmospheric pressures.

While there he is thrown into the middle of another war, this time between the red men and the green men. While learning the ways of the Martians he has to fight for his life, and hopefully find his way home.

This book is a complete thrill ride for the ages that is packed with action, and raises many philosophical arguments still relevant today about the very nature of man.